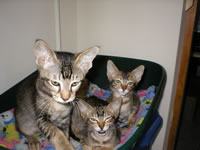 Samburu Sokokes are owned and Bred by Mrs Hilary Goodburn with the help of my husband Fred in our home near Folkestone in Kent.

The Breeding programme is to promote the breed with their people loving and cuddly natures and to breed kittens that are a credit to their breed.

Having bred Tonkinese cats for nearly eight years, I decided it was about time I diversified, but what could I possibly find that would come anywhere near to being as totally absorbing as “Tonks”. I searched the Internet website without success and suggested various different breed to my husband like: Manx, Sphinx, Rex and Bombays, but he did not really take to any of them. In desperation I logged onto the TICA website to look for breeds that I did not know, and as I found a name that was either new to me, or was not known well in the UK, I would have a look at pictures to see what they were like.

Tonkinese are the most laid back, relaxed and people loving cats you can hope to find. They love everyone and all other pets, so it was going to be hard to find something that would challenge my love for Tonkinese.

Well there they were SOKOKE, I had never heard of them so I investigated. The moment I saw a picture, I knew that I had to have some of these wonderful looking cats. I read with interest everything I could find on the internet, and I spoke at length to some breeders in Europe and the UK. They were so stunning that as soon as I found a litter with kittens available I hot-footed to see Lindsey Wright and to explore these fascinating creatures. Imagine how difficult it was to choose a kitten from a litter of 6, 5 girls and 1 boy, but after a few minutes, one little girl came to me for a cuddle and that was it, I was hooked. I chose for her a Swahili name, Mapenzi meaning Love, and I waited until she was old enough for me to collect her. When the appointed day came the little lady was not going to be caught, nor put in a carrier, nor taken to the car, and she hid from me for several days after I took her home. She would only show herself to eat and only if no one was around, but gradually the trust between us grew and she would let herself be stroked, then fussed and then eventually she would come a sit on my lap for cuddles, but only on her terms. We have spent hours together getting to know each other and now she is the most loving and cuddly of cats, but still only on her terms. She will allow me pick her up, fuss her, cuddle her, stroke her, but not to restrict her in any way, as soon as I try and hold her firmly she struggles to escape to her favourite sleeping place. I think I will have a few problems trying to show her, but I have to try. I want to be able to show her to many, many people and for them to fall in love with the breed too as I have done.

In the future I intend to breed these wonderful creatures, and luckily Lindsey Wright has a male cat, unrelated to my girl so I will only have to travel about 100 miles each way to the stud. However, if I want to use a different boy I must travel to Denmark, Norway or Sweden. However a short break in a new country can’t be bad, I will make it into a holiday. Watch this space for the patter of tiny paws.

Contact Information
Address:
6 Plover Road, Hawkinge, Folkestone, CT18 7TF, United Kingdom, Kent CT18 7TF
Telephone: 01303 893 958
Email: hylilytonkinese@aol.com
Website: visit our site
Locate a Cattery or Cat Boarding near you
x
We use cookies on our website to give you the most relevant experience by remembering your preferences and repeat visits. By clicking “Accept All”, you consent to the use of ALL the cookies. However, you may visit "Cookie Settings" to provide a controlled consent.
Cookie SettingsAccept All
Manage consent

This website uses cookies to improve your experience while you navigate through the website. Out of these, the cookies that are categorized as necessary are stored on your browser as they are essential for the working of basic functionalities of the website. We also use third-party cookies that help us analyze and understand how you use this website. These cookies will be stored in your browser only with your consent. You also have the option to opt-out of these cookies. But opting out of some of these cookies may affect your browsing experience.
Necessary Always Enabled
Necessary cookies are absolutely essential for the website to function properly. These cookies ensure basic functionalities and security features of the website, anonymously.
Functional
Functional cookies help to perform certain functionalities like sharing the content of the website on social media platforms, collect feedbacks, and other third-party features.
Performance
Performance cookies are used to understand and analyze the key performance indexes of the website which helps in delivering a better user experience for the visitors.
Analytics
Analytical cookies are used to understand how visitors interact with the website. These cookies help provide information on metrics the number of visitors, bounce rate, traffic source, etc.
Advertisement
Advertisement cookies are used to provide visitors with relevant ads and marketing campaigns. These cookies track visitors across websites and collect information to provide customized ads.
Others
Other uncategorized cookies are those that are being analyzed and have not been classified into a category as yet.
SAVE & ACCEPT
Powered by